Another sacred date that I failed to blog about in time!

November 11th officially the day of the unicorn! (Frankly speaking, I don’t know if it really is an official thing but I just celebrate it like an official day!) That very day, a Sunday, I spent at the exhibition being around a few other (comic) artists and as you already might be able to tell – those artists folks sometimes are a bit .. different. Which is another reason why I feel so happy to be one of them!

We had a great time with loads of chocolate (gnah), countless jokes and funny drawings. One them had told me the day before that Sunday would be unicorn-day and that we were supposed to draw unicorns and glittering things!

At home I went through some older sketches and found a black and white drawing of a unicorn that I had done some other time but since it’s a bit too much “girly” to my liking I had just put it away in some box.

The girl (a brilliant artist – especially when it comes to watercolours) put some colours on my sketch and even made the horn glitter! Now it’s fabulous as f***!

It’s the first time that I did a collaboration with another artist but it was so much fun and I love that unicorn so much that I just couldn’t any different but frame it and put it on my wall!

Currently it seems like I am developing a thing for pink/ glittering/ girly stuff even though it clashes a bit with my Doc Martens.

Wishing you a glittering Sunday night! 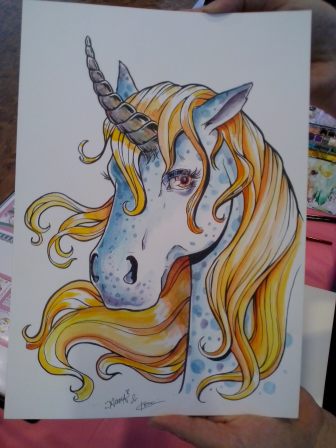 4 thoughts on “Day of the Unicorn”