I had a couple of reasons for not posting anything for such a long time (even though it seriously didn’t feel like such a long time). So if you were one of the people who were waiting for me to get back to them, please let me explain why.

One of the things that kept me away from work would be that shortly after Christmas my hands got worse again. Luckily, I finally found a skilled physio therapist who is working with me on getting my hands back to normal.

The other big reason is that my grandmother whom I love dearly got really sick. She was diagnosed with terminal cancer last summer but she did all those treatments, chemo, radiation, etc. She was already feeling better and we really had a great Christmas and we even went out for my 21st Birthday in January. I tried to spend as much time as possible with my family and over the last months we actually got even closer. In early February my gran passed out and hurt her back really bad and we took her to hospital, things got worse after that and to make it short she became a case for nursing care and we decided to take care of her ourselves. It possibly was one of the most intense and emotional times I experienced. Three days after we got her home she passed away.

It’s been a tough week since then. But my work keeps me going, which is why you’ll probably see me posting more regularly showing works in progress and a couple of projects I’m currently working on.

I started doing original artworks in bigger sizes than A4. Right now I don’t have a scanner at hand which is why I just took a picture with my camera and I tried editing it so that you can see the lines properly. For some reason I always kind of liked vultures, even though they aren’t the prettiest of birds. But in some way they are. So … loads of hair and feathers! 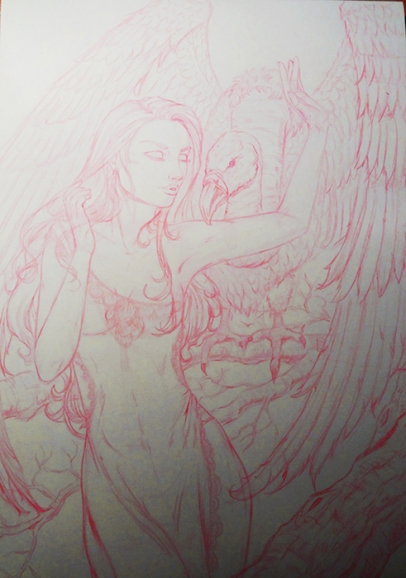 Things actually are quite busy these days because I just returned to work and I have a stash of undone work lying on both of my desks – at home and at the atelier but I hope that I can get some of the lineart done by tomorrow.